Warcraft 3: Reforged -- or rather, shattered

Activision has been hard at work (or hardly working?) on his new low-cost high-profit expectation operation, after the smashing success of WoW classic: a remaster of one of the best games ever.

They've made some rather amazing promises over the past few years, along with videos and have generally hyped this remaster. Fans were consequently very hyped as this game still has a very active community, even though the original is a 2002 game.

So let's get the show on the road and begin with our B Spectrum series!

Before getting into the remaster, let's talk about the original game and why it deserved one. Warcraft 3 came out in 2002 and is the culmination of the Warcraft saga, before WoW took it over as a MMORPG. It featured an unique take on the RTS genre, in opposition to the other big Blizzard RTS IP, Starcraft. Each game had their own uniqueness and Warcraft played a lot into unique units with a tremendous amount of power, heroes.

The game was a smashing success,

Not just a smashing success, but it defined the RTS genre for years, and its brilliant map editor is what allowed Dota 2 and League of Legends into existence. As a matter of fact, Dota 1 was nothing more than a mod and it was only playable through Warcraft 3 for many years, until Valve eventually hired Dota's creator and built Dota 2. League of Legends, the popular MOBA, was made by some other people that helped create the Dota mod, so it too was created as a result of a mod in Warcraft 3.

That is to say, the game was and still is today one of the best built products of love and has a tremendous heritage.

Thus, it is reforged

It's no wonder this game still has fans all over the world and Activision, while not able to actually smell fans, although they're usually nerds and have a certain distinctive fragrance, they are surely able to smell their money and their willingness to part with the right words. As it turns out, the words "Warcraft III: Reforged" were among those.

All your maps are belong to us

I did go on to talk about how some Warcraft 3 maps have been extremely successful over the years, wasn't random, as this pops up:

So what does it mean? It means if you somehow go and make the next craze, it will be Blizzard's.

Ah, the next craze? That was Autochess, one year ago. It began as a Dota 2 mod (dota 2 has custom maps as well). Valve worked with the team that made it, allowed on the custom maps for monetization that bypassed Dota 2 and went directly to the developer, and in lieu of the original team not really finding a way to work with Valve on a game, they went and made their own Autochess version, called Dota Underlords, which is an amazing game. That is perfectly reasonable, right?

But what does Blizzard do, in 2020? They get automatic copyright on anything anyone makes on their game, because they've fucked it up years ago when they failed to hire Dota's creators for years. Instead of being smart and learning from their community, getting new ideas, they just want to get everything as their own. Talk about fucking up.

To note: the original Defense of the Ancients (DOTA) is a 2003 custom mod for Warcraft 3. Valve hired the original creator (Icefrog) in 2009. That is 6 years Blizzard basically had first dibs had they wanted to do anything with it, but they didn't. League of Legends was already making waves by 2009, and still, Blizzard did nothing. So instead of acknowledging a huge missed opportunity, they pull out this little number on Reforged. I am already disgusted as it is, but their new shiny product still has tons to reveal.

it's time to go into PR Mode

So blizzard right after the game went out thought it was a good idea to ban members who were helpful in directing those wanting a refund to the proper channels. Can't have people getting refunds now, can we?

Obviously, as this kind of conduct is not just scummy but also not quite legal, after some complaints to FCC, GDPR or whatever each country has, now Activision offers instant refunds when requested, and it is quite very requested.

Customer Service at its Peak

Edit 05/02/20: Before allowing instant refunds, and by allowing I mean being essentially forced to offer them, it certainly was not something they initially wanted to do, this is an example chat with a blizzard representative when asking for a refund, it's quite.. well.

Here's what happens. A blizzard rep will tell you the game will never leave your account, it will wait as long as it needs to, until you get a new PC. I am appalled.

We can Just Keep Playing Classic!

Blizzard now forces you to play the new client with "Classic" graphics if you want to or have not purchased Reforged, but that means you still lose all the features lost in the new version, and the half-baked features that are there instead of full features of the old classic WC3. Talk about idiocy.

Here are some examples of people not taking this exactly well:

as it turns out, there's tons of complaints, I just grabbed a few for posterity's sake, but I could literally swim in complaints.

An additional compendium of extra-missing things / bugs / issues, on a 2002 game. I repeat, not a new release of a new product, a 2002 game.

here's a very funny post regarding how they handle basics without any shred of competence (It is so easy to handle temp files and ensure it's working properly, having this happen in 2020 is just embarassing. It's something a 15 years old wouldn't do.

So, half the answer is a pointless PR blabla without any actual meaning whatsoever. I just want to address this:

So, they're basically saying if your own expectations were not fulfilled it is your fault. They just did not remove a perfectly working game that's been out for almost two decades, replaced it with a half-assed remake that has less features and functionalities, broke their promises to enhance it and blatantly lied and fake advertised it. They did not do that, it is your fault for expecting a finished product, how dare you, customer?! They're doing their best to bring you what you want, but you do not seem to like it, and they are so generous! can't you see?!

This is the tone this exudes, and it is just so high and trying to be appeasing while also shifting the blame, it's manipulative to the next level. Completely dishonest way to set the tone, good job.

One of the concerns with Reforged that we’ve seen are the visuals when selecting Classic Mode. We’ve identified the bug causing the colors and shading to look different from the original Warcraft III, and we’re testing a fix that will be incorporated in a larger patch addressing this issue and others. We expect to release that late this week. The patch will also address many other known issues, such as fixing some portrait animations and audio bugs, implementing some UI fixes, and more. Please keep an eye out for the patch notes for a detailed list of all the bug fixes.

In short, they're addressing directly the part about visuals in Classic Mode, and for all the other issues they're saying "no worries, we'll fix things" without addressing them directly.

Another area of concern we’re seeing is regarding online features such as leaderboards and clans, which applies to all Warcraft III players, including those who haven’t purchased Reforged. At BlizzCon we talked a lot about how the team is actively working on standing up the back-end to ensure a smooth transition to this new MMR system, much like we did with StarCraft: Remastered. As with Remastered, these and other features will be included in a major patch for Reforged, which will also address the issue for players of the original game. We’ll share release plans as work progresses in the coming weeks—please be assured that the team is hard at work on standing these features up.

So this means they're forcing even players that wanted to keep playing the Classic way onto the new system, which is bad already, but. The new system is also not here, so by releasing an unfinished product, they've also cut the possibilities of what has been there for years.

There are some individual concerns we’ve seen that we’re not currently planning to address and we wanted to give the community a heads-up. As of Version 1.30 of the original game, we saw very low usage of tournaments and of the Reign of Chaos ruleset, so we removed both in mid-2019 (in Version 1.31). Eliminating the maintenance for underused elements has helped us streamline our overall support of the game and focus on areas impacting the most players. That said, we do anticipate that players who prefer Reign of Chaos will find custom games with similar rulesets, which we hope will help satisfy that concern.

Taken directly from a reddit answer to this part:

Related to that, as we talked about last year at BlizzCon, we did not want the in-game cutscenes to steer too far from the original game. We went a little deeper into the thought process behind that at the show, but the main takeaway is that the campaigns tell one of the classic stories in Warcraft history, and we want to preserve the true spirit of Warcraft III and allow players to relive these unforgettable moments as they were (albeit rebuilt with new animations and the higher fidelity art).

So it's perfectly fine to use all of the for fake advertising, but AFTER the product is out you backtrack and explain your "reasoning", which is not really your reasoning but an excuse at this point. A reasoning is to explain something before or while you do it, not to justify yourself after you've done something different than what you originally said.

The rest is a closing yadda-yadda about treating the remaster of a 2002 game as a game-as-a-service and not just a fully functional release at launch day, as it should have been. No, they need interim money as they release an unfinished product and they slowly may or may not fix things while they've already got your grab. Nice.

The fact that Classic was forcibly removed by all that had it and have now to "enjoy" the less features and bugs of the new one with a different "classic" graphic as they did not spend the money was not really talked about.

tl;dr The B Spectrum

Warcraft III: Reforged is as bullshit as it gets. Blizzard used and abused their community's love for one of the best products of love and made it into one of the worst possible cash-grabs in a very objective manner. It would've been much easier to make a half-assed job and have a serviceable remaster, but instead blizzard fucked it up so badly it is nothing short of brilliant.

Extra Bullshit because they also completely ruined the Warcraft III Classic, which was working fine until Reforged, and now is no more. They literally killed one of the games that built their company and made them as they are today.

If Activision Blizzard was not already in any consumer's blacklist for their utter lack of respect, they should definitely be there now.

So here's a bit of fun 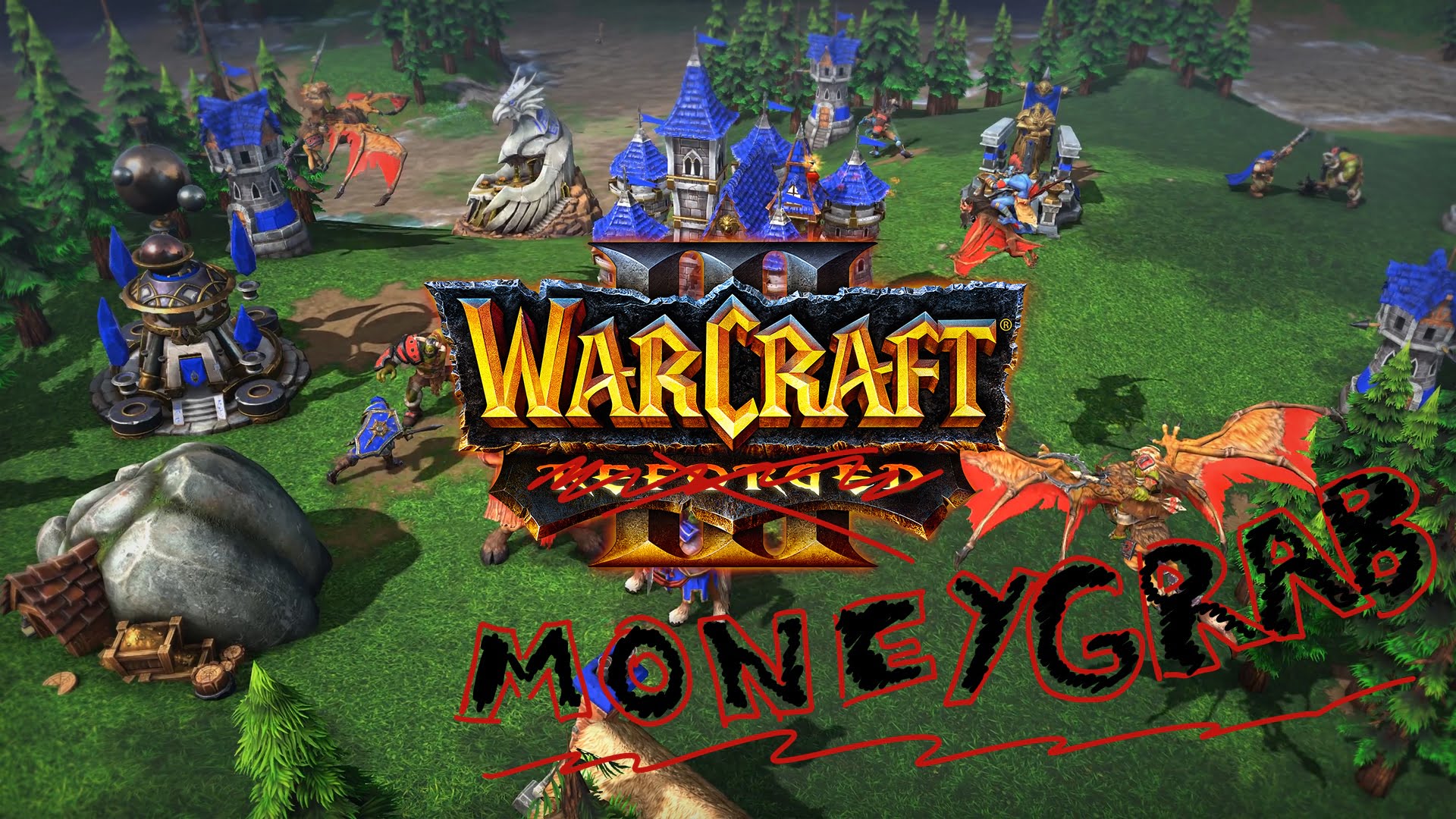