Mistakes were made, part one: The ecosystem blew up

As much as I don't want to admit it, I do make mistakes, for I am human, after all. Over the past few months clear mistakes were made and I had to adapt
(Intelligent people adapt, admit mistakes and improve upon them; bigots refuse to adapt and see the changing winds and world, because they believe that's what consistency is).
One of those mistakes involved my attitude towards one unified ecosystem and my praise towards Microsoft. Granted, I liked the idea and the initial approach; as time went on, it was clear Microsoft only had a nice idea but were clueless as to how to proceed with it, and they proceeded with a unified strategy towards disaster: no strategy at all.

Let's take a step back

The issue was that at that price range, profits are really not there. And that as time went on, android's chinaphones became more competitive and at more aggressive prices.
It was not really a market worth focusing on to begin with.

One phone for the low range, and one for the low-mid range was all Microsoft needed to give options, but that is not where they should've battled, for it's a no-profit battle.
This all happened without a new top range phone. Which is where the profit, share and eventually app purchases are, and that's what drives the app economy: mid-range onwards.

Eventually, their new top phone arrived, with good hardware choices and a decent finish plus nice covers from their new partner.

That's when some people actually thought Microsoft could stand a chance and they knew what they were doing.

Yeah, too bad the phone shipped with a clunky new OS barely working: I'd been using Win10 Mobile on my Lumia 930 and new builds always made it snappy and amazing, only to degrade within weeks.

The exact same issue happened with the final build, which lasted quite a while. My 950 XL was slow, slower than Win 8.1 phones, and certainly more bugged too.
So, problem number one: The OS always felt unfinished. Hell, even after the Anniversary Update and one year under its belt, it is still unfinished. More on that later.

Problem number two: As much as Microsoft marketed the Universal App business, the same App for every device, they obviously only marketed it to people, and not to app developers, because few got interested in that, and still, apps started rolling quite a long time after the actual products were out, and few at that.

If they had a clue about what they were doing, they would've had agreements and worked out details with most important app developers months before the official roll out, so as to have a sizeable amount of workable apps on day one.

But hell, the OS wasn't even finished yet, so obviously that did not happen.

As time went on, the phone became more clunky, eventually it would reboot itself, it would not be able to even make calls without a soft reboot, and it became slow, apps were not coming, and ultimately Microsoft's unified app failed, not because of competition, but for their own clunky and clueless fault.

Eventually after one year I was forced to switch off the platform altogether, as Microsoft itself abandoned it within the year of launch of their top range phone and began selling it towards business, meaning the consumer app development was never going to pick up.

Ultimately they failed at delivering what they themselves promised, failed to support their claims and it left with few (well, they had very few shares to begin with hah) customers fairly disappointed in their ability to follow-up and provide a good experience.

They also apparently fired their Microsoft Band team; The microsoft band was an amazing product, but they never really marketed it, and while it worked well, few people knew about it.

Again, good ideas and products just laying around until Microsoft kills them just because they are unable to make them successful for their own cluelessness (nice word!).

So, I had to choose a phone (and tracker, my band2 broke, again, lack of follow-through and a bad design choice).
There were two choices: android or iPhone.

Onto Android, where they're only there for you until they get your money

Android phones have the worst post-sale follow-up and support I've ever seen in any device. Updates come very slowly and while you may have a top range phone, you still lag because no app is ever optimized due to their laxed play store. There is no need to optimize apps, reduce bugs and ram leaks, for any app can be put there and requirements are way less strict than in the Apple Store. This results in poor quality apps that overall tax your phone.

If you purchase a Samsung (non-exploding, hopefully), LG etc, you also have stupid additions that make the interface more laggy, clunky and less responsive.

The solution is to purchase a Nexus (or Pixel) phone, then, right?

Nope, you may have the latest Android version if you do so, but most other people won't. Hell, even now the most popular Android version is 2 major releases behind. That means app developers will make apps that work with those most popular versions, ignoring the most recents updates. Basically it's as if your phone is always 2 years behind as far as improvements and optimizations go.

I find the idea disgusting, especially after my experience with Samsung S3 and S4.

So, the only left is the partially eaten Apple's device.###

I dislike Apple. But the things they do, just work.

The iPhone has the best performance out of any phone by far, and that's not theory, it's a fact due to optimized hardware, OS and apps (there are videos about it, that clearly show ram usage compared to android).
*All apps have strict requirements, and I've been surprised to notice how right after iOS 10 launched, many apps had day-one or near-day one updates, as they've had access to the beta for a long time. *

Compared to the Microsoft fiasco, that just shows how it should have been done instead.

I will stop here for I don't like praising Apple, but I have to give a bit of praise where praise is due. It's the best phone money can buy, it interacts seamlessly with their ecosystem, it's not clunky as fuck, it's not stupidly bugged, slow, doesn't require daily reboots and will hold its value for a long time.
None of this is subjective, the data is anywhere and while the best phone is the iPhone, the best phone for any certain individual may vary depending on their budget, usage, needs and what not; still, it's just the sad reality of how the mobile world has no actual competition at the top (despite their top range phones having similar prices) and Apple just dominates.

Hell, they could've released the same phone as last year with more available space and it would've still been the best phone around. Sad times.

The tl;dr is that ==I thought Microsoft had it in them to make a viable ecosystem, but they butchered the idea itself, they failed so badly my eyes are bleeding== and the one doing it well enough is Apple, even though Macs still suck and so there is no way to have one gadget ecosystem, unless you can make do with doing nothing with a Mac.
Also, Microsoft can't really be trusted and that's gonna bite them in the ass in the future, with such a poor track record for supporting their devices (or lack thereof). 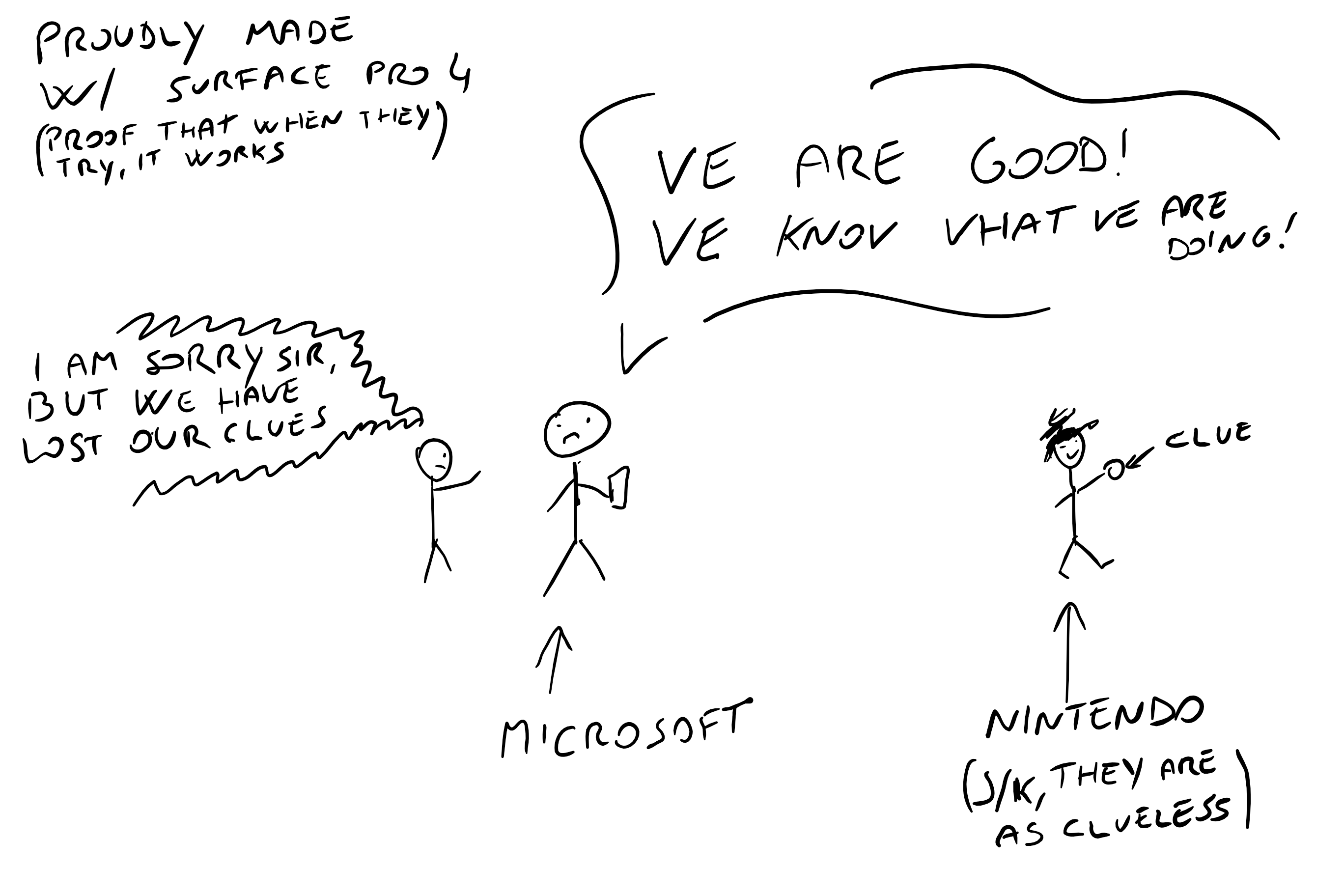