The cool word around the block: Ecosystem

It's the buzz of the moment. Every company is building their own ecosystem. And by every I mean EVERY.

What an ecosystem is in the world of geeks

In this particular case, one could talk about ecosystem when many different devices suitable for different purposes are all interconnected and useful with each other, they all share the same kind of principles and are compatible.

That's easy and it should also feel like a very good concept, one worth pursuing and exploring.

And that's only partially correct. The concept does not take into account greed which hampers functionality, efficiency and usefulness of said inspiring words.

THE CAKE IS A LIE: WHAT IT ACTUALLY IS

Companies are greedy. Everybody wants you. And your money. More like your money, you're just in the way. Anyway, what happens is surprisingly annoying yet people hardly realize it.

Companies build complex systems only compatible within their own devices or technologies.
This way they basically force their customers to only adorn themselves with the useless crap they produce.

Let's call this a closed ecosystem.

It does feel somewhat annoying, doesn't it?

Well, I don't see many complaints when Samsung releases an ecosystem based on its own bloatware (Let's face it, they're pretty good at building hardware, but their software is totally craptastic).

Or Apple, with their inability to add anything that's not Apple-centric. Sure, it's great and they've got a good marketing, but in and by itself, it forces you to keep Apple, buy Apple and be Apple-centric yourself. Except you're the one giving them money and they in return deny any freedom for your choices.

Well, you do have some freedom, which is not to use it, but then you lose advantages you otherwise have. That's not due to architecture, that's because that's how they want it to be, and I do not like being forced into something.

I've never liked Nvidia forcing me to disable Physx with an ATI card, either. Or now, G-sync, their new idea. I love their cards, but this closed ecosystem policy? I do not like it.

There can be a number of examples, and it's usually due to competition and marketing choices, but I'm not one for marketing, I dislike the general idea of dishonesty it inspires.

That's only normal, but there are exceptions

Out of all this, I'm astonished to see one of the companies that have always been as closed as it gets, try and open up as they try the actual first ecosystem: Microsoft.

While Apple is as closed as ever, Samsung tries to build an ecosystem on Samsung devices within the Android system, so a sub-ecosystem, Sony tries to kill itself with their years long ecosystem idea between its TVs, tablets and so on never working, and well, you get the idea, Microsoft has taken Office to Macs and iOS, Android. They build cool Android apps (unlike most of the android bloatware called "apps") and they're actually building the first real ecosystem meaning one universal OS that works on most devices and adapts itself into them.

There are no actual ecosystems other than for marketing purposes

12 years ago my PC had one single core, 1 GB RAM or so, and a very crappy graphics card. Radeon 9500 iirc. Nowadays most smartphones are big.LITTLE octa-cores or decently powerful quad-cores, 2 GB+ RAM and so on. Yet they come in with very simple operative systems and most basic actions are well, just uncomfortable. Be it the screen, the interface, it's a powerful hardware within a very inefficient and laggy operative system for Android and well, a very huge lump of nothing for iOS. Still better than lagging, but it's not that useful.

Then we have tablets, and they have the same Operative System, except you now have a bigger screen, yet it is so.. useless. You can read e-mails, watch videos and scroll newspapers, but if you've got to do anything else, the operative system is just limited, apps are bloatware, you're just staring at the blank but QHD screen (lol@that) or at a single app, unable to properly approach multi-tasking.

My point? Current mobile OS are toys and they're very uncomfortable for anything more than basic use. Yet their hardware allows everything.

I understand people don't care, but if I am to spend 700/1200€ I want to be able to make full use of its power, instead I'm left with a device without post-sale support and a overheating CPU I can barely make use of unless I'm a douchebag that uses a smartphone to play vidyagames (short for crappy games).

Android is more fragmented than my old Hard Disk

Android updates are released regularly by Google and therefore Nexus devices, but anything sold by manufacturers that's not Nexus will receive updates months after if they're lucky, never otherwise.

To be clear: As of May 2015, Android Lollipop 5.0, officially available since November 12, 2014, is now only on 9% of the Android devices. That includes previous top-tier devices like Samsung Galaxy S4, which just recently started receiving it, months and months after its release.

Manufacturers are the ones responsible for this horrible fragmentation, which obviously does not help apps, shitty as they already are and poorly optimized.
The general feel for android is a clean system when Google delivers it, but that gets sluggish as literally ANYBODY gets their hands on it.
The end result for the consumer is a freakinglish powerful device with hardware capable of blindfolded moon landing that lags out, takes a long time loading and gets worse and worse as time goes on, just like Windows 95/98 used to do when you installed many things and needed to format.

So this is the situation. Aaaand they want to add Wearable devices, they want to build an ecosystem out of this bullshit. They also seem serious and they waste billions on developing sluggish watches and bands, useless and also as fugly as the Apple Watch. I don't even know what goes on in their tiny little heads.
They're coming out with 20~ devices a year, each company throws out 2-3-4 top-tier devices a year, all similar, all with the same kind of issues, some even more (overheating snapdragons 810, yo).
They're pushing so hard and they're spending so much money, but this kind of effort will not be any useful for them, they're pushing the wrong things in the worst possible way.

This goes for Samsung, LG, even HTC and such, as they've focused their massive industry over Android and it means moving a behemoth that can't really easily stop once it's started, and even as financial results do not really agree with what they're doing, they can't easily steer to a better direction. They're committed and they're getting increasingly desperate as the market just can't take this much flood.

You can properly see it with the Galaxy S6 launch hysteria, as news all around of it breaking records, amassing amazing reviews, yet sales eventually were less than expected, less than the previous devices and well, things are not looking bright. This all happened within 2 weeks, from massive successful launch hysteria to depression and crysis. Signs of them being way too committed and desperate.

I'm an Apple man, I live in an Apple World

WRONG!
While one may be an Apple man and there's nothing wrong with it, the fact is we do NOT live in an Apple world, therefore by using Apple we subject ourselves to one company and one alone. We are not allowed to move out if we want to keep our things the way we are, there's no compatibility out of the Apple world for Apple features (barring iTunes) and we discard our freedom while we pledge our our money to Apple in exchange for functioning devices and an actual shallow ecosystem.

Still, it works and when you don't have time to waste fidgeting around, that's all you care for, so it has its point.

As for me, well, I do not like to pledge myself to one closed ecosystem and I do like my freedom of choice, so I choose not to go with it.

They're not built to be full-fledged Operative Systems, rather very simple solutions for small devices, stemming from times when hardware was not as powerful and you needed effective and simple ways to interact.

Now the hardware is powerful, it's the Operative System that makes it laggy and hard to deal with, plus you just can't operate the way you would want to, simply because the OS won't let you.

The issue is even more obvious with tablets. Big screen, but same OS. They're literally useless. (unless you're in for the swag factor, then they're cool, but you're not)

I've been annoyed at this ecosystem lock for a while now, and phone/tablet wise my solution has been to take part in the laplet revolution, devices actually useful and nowadays refined enough to be good work/entertainment companions.
Take the Surface 3 for example, a decently capable Windows 8 (10 soon) device that you can use with a keyboard or just usual touch. It's not as expensive as my old laplet and it can be competitive price wise too, whereas feature wise it's just a different planet.

Windows 10 preview make it seem like this capability will also be on phones, and that's wonderful.

M$ has also been releasing countless apps to iOS and Android, my Microsoft Band works effortlessly on both Android and Windows Phone, I am very impressed and pleased. It syncs with other apps too, for running and what not, so what I can see from them is an effort to keep the freedom of choice, while offering their take on multiple things and platforms, of course hoping you would give them money.

But still leaving you the choice. If you want to go, you just go and you might find their apps on some other OS still. There's no wall keeping you other than your own choice, for now, and I so like the way they're approaching things.

You don't need to lock your customers with limits and restrictions, you just need to give them good reasons to stay, and that's what they've been doing.

It's clear all companies look for money, yours and mine. It's just the way they attempt to keep you chained to them that does not seem fair, and is surely not appreciated.

As for companies trying their own "locks", they're bound to fail eventually: Sony has been paying this mistake for the past years even though they still attempt it, and Samsung will follow. Their brand is not enough to justify such an autism versus other companies, only Apple manages that. Android is simply bound to fail because the OS has not scaled enough during the years, and whereas apple always has MacOS to fall onto eventually, M$ has Win10, Android has nothing except ChromeOS which is even worse.

It may stay for the lowend market and Chinaphones, mayhaps, but I don't see it maintaining its share in the medium to high-end markets simply because of its structural problems (unless they're somehow fixed, but that's very hard to believe).

Yeah, it seems impossible right now, but we'll see in a couple years.

Points were made throughout, some fishfights happened, in the end I welcome my Lumia, my rooted S4 is now only my jukebox/hearthstone buddy, I dislike companies trying to lock in their customers and I do not appreciate simplistic iOS and Android, limiting the use of powerful hardware. 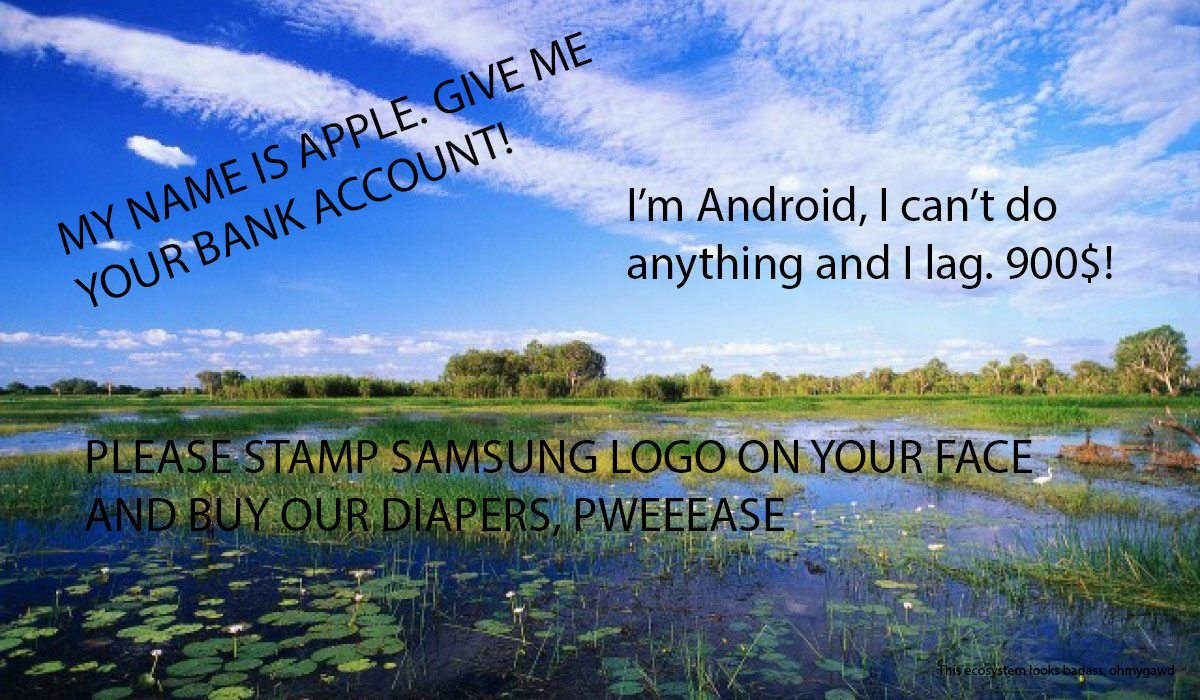