CoVid-19 is currently making a sweep all around the globe, with some countries currently more affected than others, that's a known fact.

If We Don't Acknowledge, It's Not Real... Right?

What I've observed for the past 3 months has been a circlejerk of gigantic size, with literally all the people in power trying to minimize the situation and coming to the point where they would insult other countries for their perceived failings and exaggerations (as an example a UK doctor and some idiots in the EU government bodies - really, a bunch of people just occupying seats), in the wake of the virus disrupting said countries' normal activities, only to then declare national emergencies and country-wide quarantines a couple days later, as the virus spread through their own country.

We all had the same information

Back in January, when China was having enormous difficulties, a month or so in their outbreak (meaning by then literally every country had some infected people, denying this is like saying the earth is flat), every country shrugged it off as just a flu. When it started spreading to other countries at an alarming rate, the same nay-sayers kept stating it was just a flu, without taking any step at all to try and prevent the spread or prepare for what was coming.

Seeing as I live in Italy, I do receive a ton of crappy italian press and I watched first hand the media and politicians trying their best to lowball the now-called pandemic, to prevent panic and at the same time to prevent proper measures to take place.

I myself got made fun of for trying to set in place certain measures to help lessen the blow once the virus spread here, it's like people didn't want to accept the possibility of something this bad happening. As a result, nothing happened to help prepare for it.

We all had the same information, but while I and many others understood what was coming, most of everyone would refuse to accept the possibility, nevermind doing something about it. Not that doing some small things to prepare for it would cost much in any kind of measurement, so I realized it was more of a mindset issue, nourished by untrustworthy institutions.

Institutions do not care to be straightforward

The institutional bodies that are supposed to direct international and national health are the main protagonists of handling this pandemic and time and again they have shown clearly inconsistent data, only to then slowly change their message overtime, in a way as not to result in a total 180 reversal.

However, the spread of misinformation came primarily from them. What this shows to me is that it is not important to show real unfiltered actual data and prepare the response, but it is important to manipulate it and talk it over in away as to support the message they want to tell.

From what I imagine there are many reasons it has been handled this way. One being the incompetence of the people handling it. Not all are incompetent of course, so my guess is they wanted to prevent mass-panic, as the mass is clearly not capable of handling emergencies or disruption, see the many incidents, supermarkets being razed, toilet paper getting overpurchased and all that.

That could explain the incompetents as well. They would be the ones incapable of processing this disaster, just like the masses, so... they deny it.

We grow up with school institutions to prepare us to the current state of the world and to fit in like cogs, so when we don't look around us we never really learn anything that's not shoved up our face. I see most don't care to learn anything, look around, consider things.

Thus the idea of the status quo changing due to an illness you can't see or protect from is terrifying as it is not something anyone knows how to handle, it's off the rails.

This modus operandi does not solve the problem in any way, though, it only makes for a bigger disaster.

Most of the countries have done this. Even China itself wasted 6 weeks trying to suppress any information and try to keep it quiet, resulting in what happened. The other countries did not learn from this and have acted similarly, by not taking action ahead of time, only when poop hit the fan and the whole room got smeared.

There are exceptions to this: South Korea and Taiwan have taken steps appropriately and swiftly to track, isolate and fight the virus, with a working infrastructure. Something that even my country doesn't have, as there have been cuts to health for the past many years, the system is not nearly as efficient as it could be to sustain emergencies.

In order to squeeze more profit or divert money elsewhere, very few countries can handle emergencies, and this is more of an emergency than most can fathom, so yeah, can't prepare for it really, but could have a solid structure in place to take the blunt, which very few do.

To this day, 22nd of March, there are still people going out and meeting in groups, completely selfish even during lockdowns, they are behaving in terrible ways to the point of requiring police or army to force them. It's a matter of life and death, and there are many still unable to grasp this.

Staying at home is not the end Yet, nor the worst

However, one thing I'd like to point is at the ridiculousness of people unable to stay at home. They get bored, they get anxious, they constantly complain and are generally miserable. The thing is: This is just the beginning, this is the peak of our previous condition, as things will change.

What I see is the calm before the storm. The lucky ones stay at home, quarantined, while still retaining all the previous things they have built, without yet facing the incoming crisis. Alas, there is an opportunity to work on ourselves, improve, so that we can face the difficult days ahead with more chances.

Being cogs and sheeps will only get you so far in a time of crisis, gotta make things happen, or fail trying.

Instead, I see people at home being anxious, scared while wheezing away watching movies or tv shows, anxious at these very scary and uncertain times, but... staying at home is LUCKY. By staying at home it means they are not infected nor are they the doctors, nurses and staff working their ass off to fight the pandemic.

There's a way to appreciate being lucky: doing one's best and not bitch, even if the situation is bleak.

We've wasted months by dealing with slow response and people being too dumb to understand lives are at stake and ignoring quarantines.

These months wasted will have repercussions for YEARS.

Don't be the idiots, let's all do our part in making sure this ends as quickly as possible, and then work on recovering.

Be positive, be helpful, be your best yet to yourself and to others! 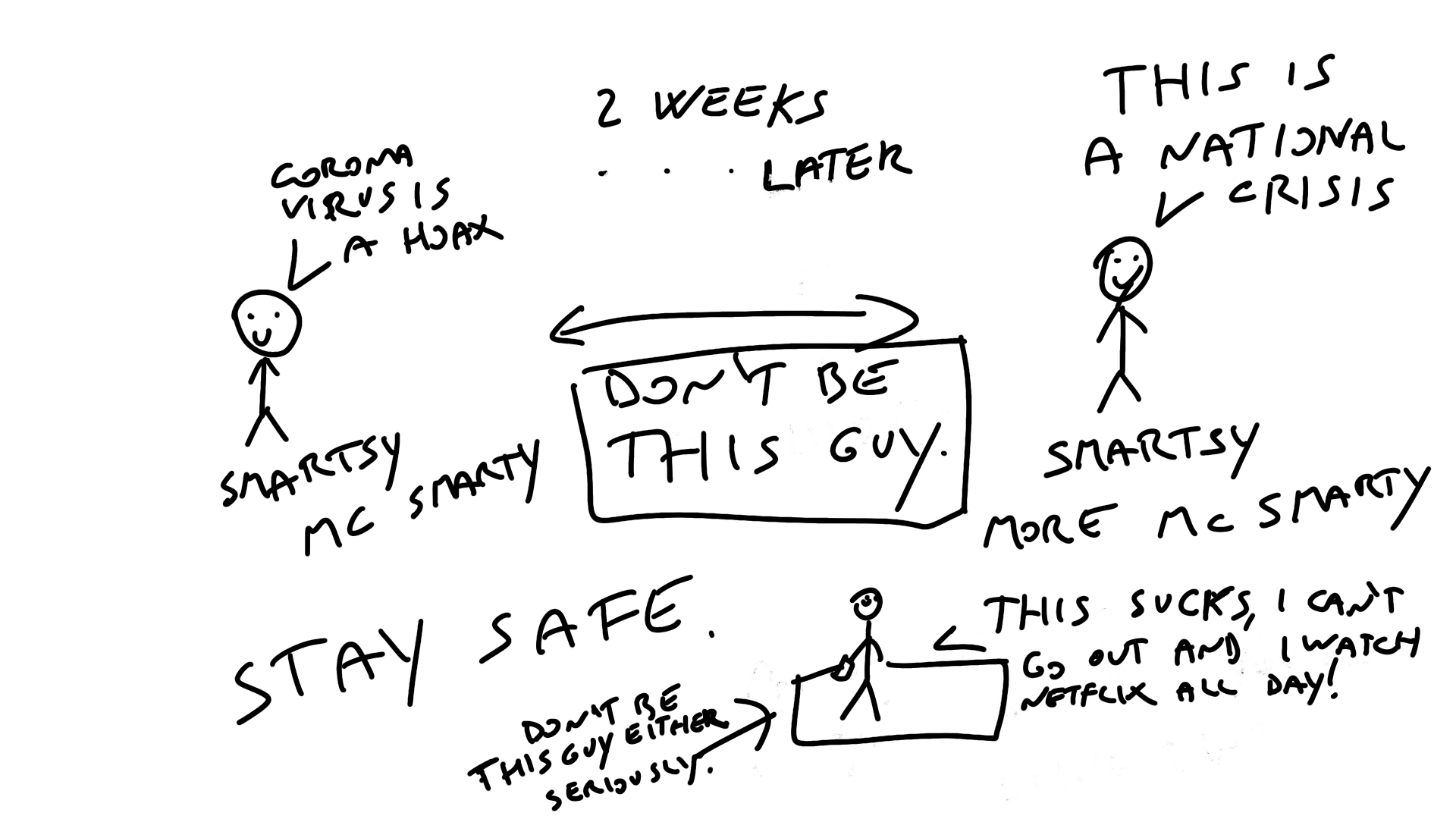